Expain Change are two revolutionary enlightenment products to prevent neck, shoulder and elbow ailments in both sedentary and static stressful postures. By feedback of muscle work, this is an obvious product for my patients to reduce overloading and further pain.

Suitable for Everyone
Everybody gets sore and stiff neck and shoulder muscles every now and then. For many, the soreness will not go away, and this leads to pain. Current treatments does not remove the cause, they only address the symptoms. The EXPAIN Change Neck & Shoulders is a wearable device that enables the user to remove the cause of their pain, and prevent the neck pain from comming back.

Usage
The device is attached to the skin over the muscle between the neck and the shoulder, in parallell with the muscle fibers. It measure and analyze muscle activity and vibrates when it detects a muscle activity pattern that might lead to pain. The vibration is a signal for the user to take a micro-break. When the user takes a micro-break, the muscle relaxes and can recover from static or long-term activity. After a while, the user will change their habit and regularly start to take more micro-breaks, unconciously. This will remove the cause of the pain, and the pain will be reduced and eventually go away. The device can also be used as a tool in making a workstation more ergonomic and detecting what activities during the day that cause muscle pain. The device is for everyone with muscle-related neck and shoulder pain. Use the device out of the box, or connect it to a smartphone for getting the most out of your EXPAIN Change Neck & Shoulders.
Video


Research and Development
Research conducted by the Norwegian Occupation Health Institute (STAMI, Hanvold 2012) show a correlation between sustained muscle activity and pain. The EXPAIN Change Neck & Shoulders tell you when you are having sustained muscle activity. By making you aware of the cause of your pain, you are able to change your habits and then remove the cause of you pain. Seeing signals from the body that you normally do not feel is called Biofeedback, and research show that Biofeedback is the best tool for habit change when it comes to muscle activity (Ma 2011, Frank 2010).

Show reviews in all languages (29) 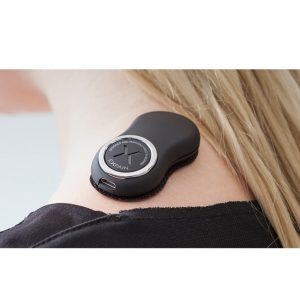