The Expain Experts
“The Extensor digitorum communis muscle is the muscle most commonly related to pain in the arms from computer work. The muscle is located on top of the underarm where the Expain Change Arm is placed. The muscle is used for lifting the hand, the index finger and the pointer finger. When using a computer one often use this muscle constantly, even though it is not needed.”

“Expain Change Arm make the user aware of unconscious muscle activity in the under arm with biofeedback.”

“Expain Change are two revolutionary enlightenment products to prevent neck, shoulder and arm/elbow ailments in both sedentary and static stressful postures. By feedback of muscle work, this is an obvious product for my patients to reduce overloading and further pain.

Usage
Everyone using a computer are using their arms and hands for something else than the nature intended. Typing on the keyboard and controlling the computer mouse can be straining on the small muscles in the underarm, and many people suffer from muscle pain. The EXPAIN Change Arm is a wearable device that enables the user to remove the cause of their pain. The device attaches to the underarm with an elastic strap. It measure and analyze your muscle activity and vibrates when it detects a muscle activity pattern that might lead to pain. The vibration is a signal to take a micro-break or change your arm position. When you a micro-break, the muscle relaxes and can recover from static or long-term activity. After a while you will change your habit and regularly start to take more micro-breaks. This will remove the cause of the pain, and the pain will be reduced and eventually go away. The device can also be used as a tool in making your workstation more ergonomic and detecting what activities during the day that cause your pain. The device is for everyone with muscle-related pain in the underarm. Use the device stand alone, or connect it to your smartphone for getting the most out of the EXPAIN Change Arm.

Research and Development
Research conducted by the Norwegian Occupation Health Institute (STAMI, Hanvold 2012) show a correlation between sustained muscle activity in the neck and pain in the neck. The Expain team has strong indications that the same correlations are present for pain in the under arm. The EXPAIN Change Arm tell you when you are having sustained muscle activity in the under arm. By making you aware of the cause of your pain, you are able to change your habits and then remove the cause of you pain. Seeing signals from the body that you normally do not feel is called Biofeedback, and research show that Biofeedback is the best tool for habit change when it comes to muscle activity (Ma 2011, Frank 2010).

Patent Pending
This kind of product has never been in stores before now. Be a first mover and take care of your own health with the help of this quantified self biosensor.

Be the first to review “EXPAIN Change Arm” Cancel reply 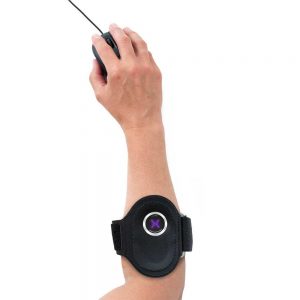